After many years of research, a brilliant scholar and writer named Arthur Koestler published a 255 page book entitled THE THIRTEENTH TRIBE in which he proves that Eastern European "Jews" are neither Israelites nor "Semites," but are instead Khazars, Mongols, and Huns!!

Mr. Koestler was born in Hungary and became a British subject in 1945. Obviously his death by "suicide" was intended to kill the messenger . . . because they couldn't refute his message!!

THE KHAZAR EMPIRE AND ITS HERITAGE

This book traces the history of the ancient Khazar Empire, a major but almost forgotten power in Eastern Europe, which in the Dark Ages became converted to Judaism. Khazaria was finally wiped out by the forces of Genghis Khan, but evidence indicates that the Khazars themselves migrated to Poland and formed the cradle of Western Jewry. . .

The Khazars' sway extended from the Black Sea to the Caspian, from the Caucasus to the Volga, and they were instrumental in stopping the Muslim onslaught against Byzantium, the eastern jaw of the gigantic pincer movement that in the West swept across northern Africa and into Spain.

In the second part of this book, "The Heritage," Mr. Koestler speculates about the ultimate faith of the Khazars and their impact on the racial composition and social heritage of modern Jewry. He produces a large body of meticulously detailed research in support of a theory that sounds all the more convincing for the restraint with which it is advanced. Yet should this theory be confirmed, the term "anti-Semitism" would become void of meaning, since, as Mr. Koestler writes, it is based "on a misapprehension shared by both the killers and their victims. The story of the Khazar Empire, as it slowly emerges from the past, begins to look like the most cruel hoax which history has ever perpetrated." 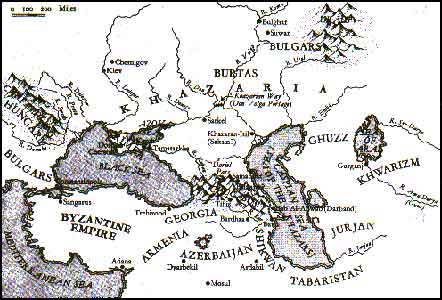 Mr. Koestler associates the infamous Gog and Magog with the Khazars

Back to Main Menu